The Yellow Wallpaper PDF is a short story written by an American writer Charlotte Perkins Gilman. In The New England Magazine, this was first published in January 1892. The book illustrates the mental and physical health of women in the 19th century. If we talk about American feminist literature then this book is an important example.

Wanna Start Reading This Story Today? Download The Yellow Wallpaper Epub and PDF from below and start reading it today. 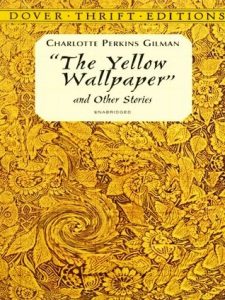 The Yellow Wallpaper – Review And Details:

The whole story of The Yellow Wallpaper Ebook is narrated in the first-person sense. It is actually the collection of journal entries, that is written by a young woman, whose husband (John) is a physician, and they have rented an old mansion for spending summers.

As the author followed themes of powerlessness and madness in the following book, it is sometimes related to Gothic literature. Though it is not a ghost story, maybe it is a ghost story, because of the opening style of the text by the author.

The Yellow Wallpaper PDF is about a young woman and her physician husband, who was living in the upstairs mansion, of an old mansion they had rented for summers. The woman was suffering from temporary nervous depression after the birth of their baby. That unnamed woman was forbidden from working and writing and was advised to eat well and get plenty of air.

She as a narrator described torn wallpapers, metal rings in the walls, barred windows, and much more, and how her husband has imprisoned her in an upstairs nursery. She thought she had been trapped behind the yellow wallpaper.

About The Author (Charlotte Perkins Gilman):

Charlotte Perkins Gilman was born on 3rd July 1860 and died on 17th August 1935. She was an American humanist, writer of short stories, nonfiction, and poetry, and also was a well-known novelist. She was also a lecturer on social reforms.